A split complementary color scheme is one where a primary color is used with the two analogous colors to its complement. In this case, blue is matched up with yellow and orange red. Orange is the direct complement to blue and orange red and yellow are the analogs to orange.

Let's take a look at the following color wheel. The blue panel is selected on the far left. Yellow orange is directly across, and that would be the true complement color. But we move a bit clockwise and counterclockwise around the color wheel to select the two split complements to blue.

Split complementary colors have a strong visual contrast like standard complements, but tend to be a bit less jarring since they're not direct complements.

Splits also have the advantage of being a hard color set to mess up so they're good for those without much experience with color theory.

Here's an example of a few split complementary color sets. The left column of the image matches the 12 colors around the color wheel on this page. The middle and right columns are the two split colors that go along with that color. 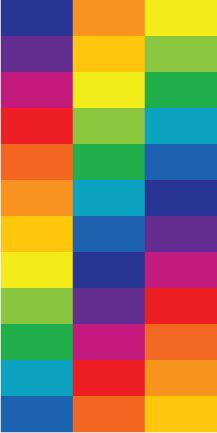 If that's not enough, every color on this site shows the split complementary color set that it is a part of. Take a look at the reds, blues, or greens and click through on a color you're interested in. If that's not enough there's a menu across the top that lists several color sets that are great starting places.